A formal letter is a common document used for people to communicate things that are considered more formal than usual. Letters of acceptance, resignation, and offer letters are all types of formal letters. This template is more general and can be used for communications that are legal in nature or letters that are just meant to be formal. 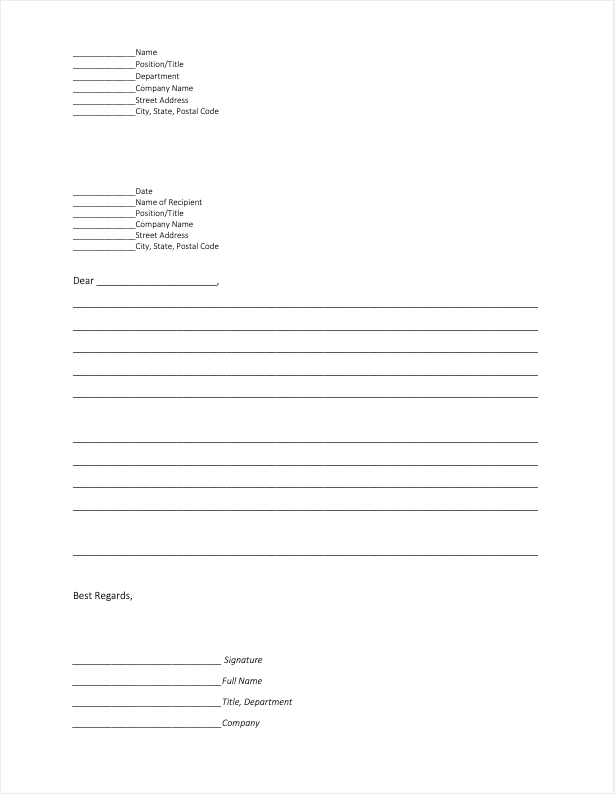 When you send a formal letter, you need to include a specific list of parts in the format. The letter can take up one page, or it may fill multiple pages. It is quite common though to keep formal letters short, and not more than a couple of paragraphs in length. At the beginning of the formal letter, you can include the information about the sender, which is yourself or your organization.

You need to keep in mind that the sender should be the actual legal organization that the letter is being sent from, in the case of a legally binding notice or other type of official document. That means that the entity that is making the formal letter should be listed under the name, address, phone number, and other details. These details are usually set by the articles of formation or incorporation of the company, and can’t just be any address and phone number.

In certain countries and localities, there is another part to keep in mind that isn’t in our template: the official stationary. Many companies have stationary, which is a type of paper which has been pre-printed or even embossed with logos, letterhead, and other identifying marks. These are often difficult to make on a normal printer, and add an element of authenticity. Check to make sure with your local laws if you need your letter to be printed on official stationary.

Then, you should include the date. For legal documents, this should be the effective date of the letter, but for other documents, you can include the date that the letter should be sent on. The date needs to be in a formal format. For dates, this means normally to spell the date out fully, like “Friday, December 2nd, 2018.” Or, alternatively, more simply 2-Dec-2018. It’s quite rare to write the date as shorthand like 12/02/18.

The next part of a formal letter is the addressee or intended recipient of the letter. The addressee should also be listed as the formal address. If the intended recipient is a representative of a company, then you should list the formal address of the company. If you don’t know this address, and only know an address of an office, that’s normally fine. If you are sending some kind of legal notice, there might be contract stipulations that state a ‘notices’ address or ‘notification’ or ‘communications’ address. You’ll need to stick to that.

For less legal requirement letter types, you can send to the best known address, and don’t need to worry too much about the proper, formal address of a company. Certainly for sending letters to a person, the last known address or address-on-file is normally correct. In this section, you should include the full name (including middle name, if known), role, and full address. If you’re sending an international letter, make sure you include the country as well. You can choose to include the phone number in this section as well. If you do, be sure to include the country code for international letters.

Next, one of the most important parts of any formal letter, the salutation. The salutation is the part which reads “Dear John Smith,” in a non-formal letter. It establishes the formality of the rest of the letter, and can be read in a number of different tones. For example, “Dear” lends a general, semi-formal tone. “To whom it may concern,” is one of the most formal salutations, and is best kept for company-to-company serious communications. “John Adams Smith,” leaving out the word “Dear,” is a more serious tone, and can be used to increase the formality when directed at a person. Whichever form you choose, just make it proportional to the style you’ll use for the rest of the letter.

At the midsection of the letter is the body. In the body of a formal letter, you’ll want to be straight to the point, and use no more than 3-4 sentences per paragraph. Formal letters are meant to do something specific, so the writing should be specific, and not use flowery language or filler words. Use about 2-5 paragraphs overall to keep the reader engaged. If necessary, make your letter longer, but just keep in mind that some elements may lose focus if the text is too long.

At the end of the body, typically there is a call to action, or CTA. The call to action states in one sentence what is required of the reader. It should be the next action, the next step, or the one-sentence summary of the entire letter. Keep it short and to the point. Your tone should be reflected here as well. If it’s a disciplinary letter, the tone should be such. If the letter is of an invitational nature, strive for cordiality and elegance with your tone.

At the very end, it’s time to say goodbye. “Regards,” “Kind Regards,” and “Sincerely,” are common ways to close your letter, and are referred to as the “complimentary closings.” These can be neutral to endearing, although in a formal letter, it’s best to err on the side of a neutral tone. Every language and culture has rules and conventions that determine the best way to close a letter, and there are fascinating and varied distinctions throughout the world’s cultures and history.

In personal letters, your signature at the end of your letter can just be a simple monogram or initial, or your name. In formal letters, generally there needs to be a bit more. The signature, followed by the full name typed out, and even the position, title, department, and company name should be considered. It’s also common to have a formal letter signed by multiple people, such as the author and the department head or president at the company.

Whatever your case, ensure that you leave enough room for all of the signatures you’ll need at the end. With all of the trappings involved in a formal letter, it makes a lot of sense now that they are often not more than a couple paragraphs long, with the majority of the space taken up by formalities. Now that you have the basics, you can make a variety of different formal letter types, and take your business or personal communications up to the next level.