As your project develops, at some point it becomes time to invite a team together and help to achieve a common goal. Study groups, class projects, extracurriculars, volunteer groups, task forces, and project teams can get together and set forth common goals.

To prevent disputes and maintain a healthy team, it’s recommended to set forth ground rules for all aspects of the team’s interaction. Maintain a positive, creative, healthy problem-solving environment, and grow together as you move along through your project. 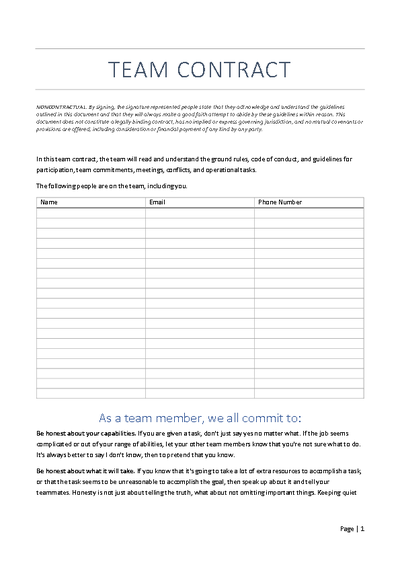 The team contract isn’t a legally binding agreement enforceable in a court of law. Instead, it is an acknowledgment of ground rules, for how to operate as a group, to best suit the development of your project’s goals. An acknowledgment is where each person promises to try their best to abide by the goals given in the guidelines written, but not in exchange for any money or any other promises. When writing a team contract, you will want to explain to the teammates the important tenants of being a team member.

For example, often this Team Contract is also called a code of conduct. The two types of documents are very clear, concise, and can be repetitive. This repetition helps to reinforce the primary concepts of respect, honesty, privacy, and hard work. In the different situations that your team might encounter, your code of conduct needs to explain what is expected of the team members and show them the right way to do things.

The team should commit to the rules of being a team at the very beginning. This team contract isn’t something that can be terminated or closed, because it’s not a binding contract. It should continue on, and be used as a set of guidelines for all aspects of social collaboration in your project. Just because someone doesn’t participate or follow the rules all the time doesn’t give you or anyone else the right to kick them off the team either.

The contract shouldn’t be used as a strict set of rules, but rather, as aspirational notes to strive for, for all members. Many of the core concepts that make your team great aren’t measurable. By contrast, your project has criteria for completion, and deliverables that are well-defined. What you can’t define well is what it means to “try your best”. You can’t force someone to do this, you can only ask and be a good role model, which they can aspire to mirror.

When your team is following all of the guidelines in the code of conduct written here, they will be functioning well as a team. They will listen first, then try to be understood second. They will respect each other’s ideas, and not criticize them, but rather, build upon them. Disputes and private matters won’t be aired in public, and instead will be brought up at the appropriate time or place. And decisions will be made as a whole, with each member of the team having a fair chance to state their case.

This Team Contract focuses on all of these core ideas and repeats them in different contexts: initial commitments, meetings, decision making, conflicts, issue discussions, and operational rules. In all of these different contexts, your team members will understand the principles that matter to the group, what their expectations are, and how to handle things when they don’t go as planned.

Although this isn’t technically a contract in the legal sense of the word, it has some terms that seem like a contract. In the beginning, it’s stated clearly that none of the terms are binding. With this clause, no one would be able to use the Team Contract as an enforceable contract, and use it in court to sue or to seek damages from another party. If any dispute arises during the project that the team is for, they will need to follow the guidelines for the dispute resolution which are formed in the document.

In such a non-contract, care is taken to ensure that there isn’t evidence or basis for a lawsuit. On the other hand, such a Team Contract doesn’t prohibit or limit liability either, so it doesn’t function to provide any protection for parties involved. The team members could file any kind of lawsuit against one another, or against the whole rest of the team. Without a binding contract of some kind with clear clauses, in some cases, the liability might increase for the team members.

It’s written in the format of a code of conduct, so this document doesn’t include any items talking about how much people are paid, what conditions there might be for staying on the team, or any kind of strict non-disclosure. Although a signature is provided, since it’s non-binding, any confidentiality clauses meant to keep information private won’t hold any legal effect.

You must rely on the goodwill of the team members to maintain an agreeable environment for all, and to ensure that all parties are treated well and achieve their expectations. In principle, this document serves to increase goodwill, and show people that the rest of the team cares about them and respects them.

If these team members are your employees, consider using an employment handbook. They are in general very similar documents. Not quite contracts, they still put in writing the ground rules, and employers can rest assured that the employees have acknowledged the main ideas of what is expected of them.

With documents like these, you’ll be able to organize all of your organization’s cultural philosophy, helping teammates understand how they should fit in and behave with the larger group. If people feel included and know what is expected of them, the majority of people will respond positively, and lend additional strength and optimism towards your project.