You’ll need to do all of the proper research and homework first, but this template will give you a head-start and a useful framework. You should always consult a lawyer, though, before finalizing any contracts. 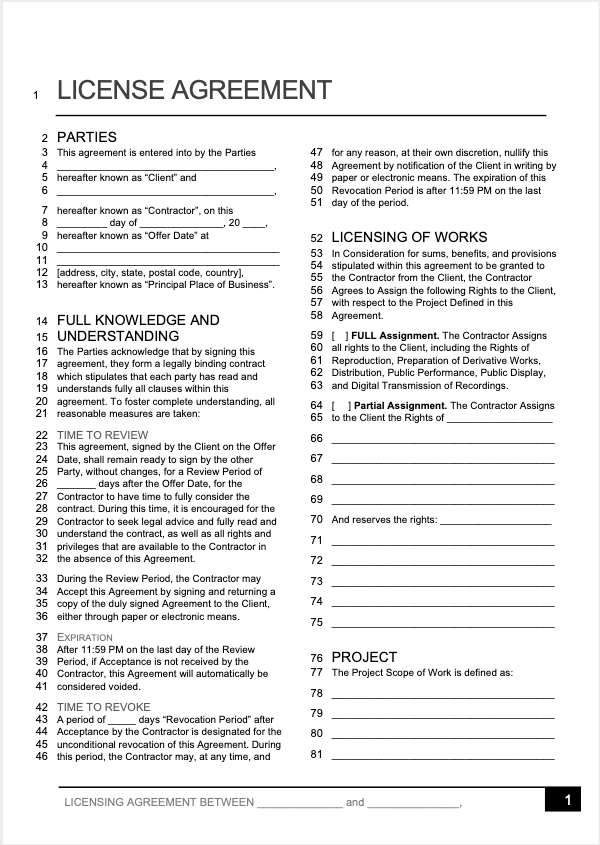 First off, a licensing agreement needs to include all of the typical parts you need to include in any contract. The licensor and the licensee are the two parties in the contract, exchanging intellectual property on one side and money on the other side.

Some examples of things that can be licensed in a licensing agreement are intellectual property like patents or trademarks, written materials like magazine articles or books, and artistic work like photography, sculptures, or other physical artwork.

Although you, as a small company may have a very good creative team, creating beautiful artwork, or other licensable assets, you may still find that your access to the market is not what it needs to be. In this case, you can license your intellectual property, be it anything from a recipe to a piece of software, to another company for them to access a larger market. You can charge those company royalties, and both companies make plenty of money by selling the product or service.

In a licensing agreement, you need to include as much detail as possible to fully constrain the usage of the material which is being licensed. The more element you can incorporate into the agreement, the less chance you have to make a dispute later on. Ensure that you include at least the location where the license is allowed to be used for any licensing agreement. Also include the start and the end dates where the parties are permitted to use the property.

You can imagine that any of these parameters can be played around with adjusting the pricing model and make the licensing agreement fair for both parties. Royalties often have to scale with the amount that the contract is worth. For example, suppose a book takes off in a particular market. In that case, the royalties need to be expressed to by a formula not to make the licensing company go bankrupt paying royalty fees.

Licensing agreements often carry a certain amount of risk related to the volatility of the market. The licensor and the licensee both need to make a profit off of the transaction. Still, the ultimate source of the income from the contract is from the market, which is purchasing or otherwise increasing the licensed item’s value.

By entering into a franchising agreement, a type of licensing agreement, companies can access branding materials and develop a likeness for the parent company. They are enabling franchisee holders to access by a more massive portion of the market than they previously would. Simultaneously, the franchisee will need to spend some of their income paying royalties or other fees back to the franchise holder.

In any typical agreement, you also need to include the sections about dispute resolution, termination, qualifications that the franchisee may need to hold during the franchise operation, and many other clauses specific to the contract. A licensing agreement is one of the most variable agreements because it often deals with intellectual property, software, or other non-tangible assets. To secure these non-tangible assets and make a fair and reasonable contract on both sides, parties need to invent new ways to leverage their positions.

Licensing and copyright law varies from locality to locality. It's incumbent upon the contract parties to ensure that the laws are followed in their local jurisdictions. The local jurisdiction should be stated in the contract, and relevant legislation or rules that apply to that particular contract might be restated in the contract itself. Another standard provision of a license agreement is a clause that states the contract’s validity concerning local regulations. Even the best lawyers can sometimes write a contract that directly contradicts the local laws. These types of clauses typically protect the rest of the agreement, in the case that a particular clause or one specific set of words needs to be stricken.

Finally, it is possible to assign the rights of a copyright or license from one person or legal entity to another. Although not very common and potentially easy to litigate to remove such an assignment, it’s more common in some specific geographic arean. Outside of the United States, copyright law varies dramatically, so if you fall outside the US, don't assume that these provisions apply in any way.

Licensing is often not a one-sided deal. Suppose the intellectual property is new, and the market has not been exposed to something similar, or the market has just not been developed well enough. In that case, both companies or entities will need to work together to develop that market. It's not simply incumbent upon one or the other to do this job. As market conditions change, you may need to renegotiate your licensing agreement. That's why the most successful licensing agreements are usually the most dynamic, and the ones which incorporate his short licensing period, allowing for changes to be made down the road as market conditions and competitors evolve.

If you have received or desire to issue any legal document, you must consult a lawyer. Kdan Mobile provides this template for educational purposes only, and you are always responsible for creating any legal agreements you sign. By clicking "download," you agree to indemnify and hold harmless and inure Kdan Mobile for any damages incurred due to the use of the said template for commercial purposes.