A letter of agreement is a formal way to establish terms between two parties, regarding any number of different methods of making a deal. You can use a letter of agreement to solidify an oral contract by writing it down on paper, or it can be used for specific things, like settling debts. 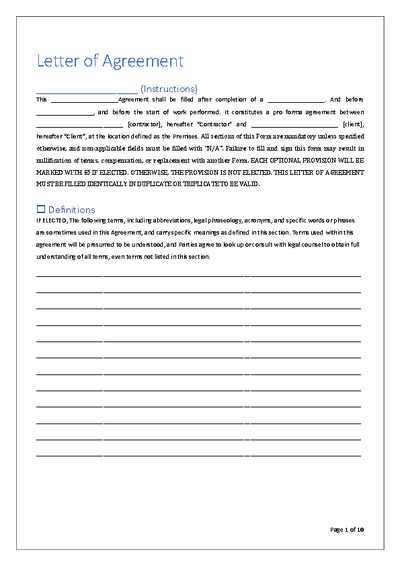 In order to create a legally enforceable agreement, you need to include several key elements. An oral contract can be made, and especially if there are multiple witnesses to the conclusion of the agreement, but creating written contracts is always more convenient, especially when it comes to the proper understanding of all of the subtle points and terms involved. Letters of Agreement are ways to create contracts between parties and to legally bind the organizations or individuals involved in the terms.

A letter of agreement is signed by both parties, but can be signed on one side first. This part is called “offer” and “acceptance.” In the offer, all terms are set forth in writing, and usually typed or in pen, as a permanent form, which is not easy to change. The offerer then signs the agreement in a unidirectional way, so that the agreement is available for review by the other party. Often in the case of an offer and acceptance style agreement, the parties are located in two separate locations, and literally use the letters to communicate back and forth. This is commonly believed to be where the name “letter of agreement” comes from. A contract in older times was simply a letter, which described the deal which was to be made, and was signed (eventually) by all parties involved.

A letter of agreement, interpreted as a contract, must have all of the components to make a full contract in order to be valid and legally enforceable in court. If the letter of agreement is intended to be binding, it should say near the top of the agreement. This is sometimes referred to as the “declarations,” and is at the very beginning or near to it. “We the parties, hereafter intend to be legally bound…”

The next component which is necessary is a listing of the parties. At least two (and rarely more than) legal entities need to be identified in the listing of parties. It can be the buyer and seller, the landlord and tenant, or the employer and employee. Many contract formats exist which include standard parties. The most common is to include just two parties- one that offers the agreement, and one that receives and accepts.

Sometimes, clauses such as “durability” or “survivability” can extend the validity of particular sections of the agreement. These sections are exceptions to the effective and expiration dates. Often times, these include non-disclosure agreements, confidentiality, privacy policies, or nonwaiver type clauses that reinforce the local rules and governing laws.

Speaking of governing laws, the governing law must be mentioned in the contract in one form or another. The contract may state somewhere that it’s subject to the laws of the state of [somewhere], and even mention specific statutes that the contract builds upon. It’s required, because some states will have particular laws, and other states, provinces, or localities, in general, may have other specific ordinances or legislation that applies to your agreement’s subject matter.

In your letter, you will also need to include the acts performed and consideration. They are normally described in two sections, but they are a pair. The consideration is usually the amount of money that one party is giving to the other, and can sometimes come in the form of other things, like services or other financial instruments. Generally, though, the consideration is a financial device of some kind. On the other hand, the acts performed can be any number of different things. They can be the maturation of funds in the terms of an investment program, the performance of services, or even the act of delivering goods to the client or customer.

The last element of any legally binding contract is the execution. Execution is when the contract is signed and set forth into its binding status. No further action needs to be taken in order to make the contract binding, but it might not be in effect right away. Remember, the effective date is responsible, and it may even be conditional or triggered by a specific event. These events can belong in the future, and may never even happen, so don’t think that just because a contract is signed, that it must be fulfilled right away.

The execution historically would be performed in front of someone like a notary public, sheriff, or other authority figures. “In witness whereof” is usually how the execution starts. It means that someone- a trusted third party- also saw you sign the agreement with all parties involved. Today, these witnesses are often omitted, but in some cases, contracts may require a notary to be present, and for them to apply their seal or stamp to verify the signatures of parties. Even more advanced- contracts may be signed with electronic signature systems, which can act as a third party as well, greatly streamlining the agreement process.

A lot of advancement has happened over time with writing letters. Once penned by dipping into ink on parchment, letters are now sent around the world with encryption and at the speed of light. They can be just as legally binding as those old hard copies, so we need to treat them with care and attention. Use this basic template to get started, as it includes all of the primary sections anyone should need for a typical Letter of Agreement.