Independent contractors can be used for a variety of different work and can work similarly to employees, but they are typically less dependent on you as the employer. Governments often have very strict rules on what employment contracts must contain, but independent contractors are far less regulated, allowing startups and small companies to hire without a lot of legal work. 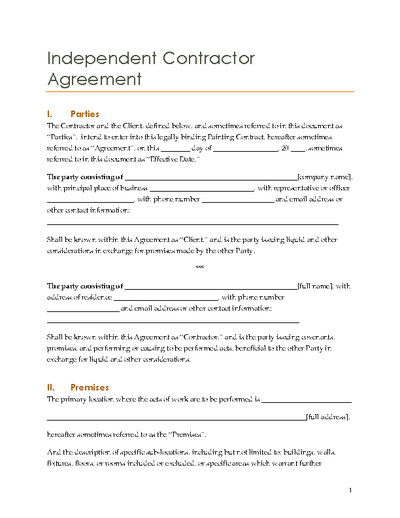 This independent contractor agreement is different from the typical employment agreement. It’s more generalized and allows companies to work with other companies, not just individuals. A contractor is technically not an individual or person, but another type of legal entity. People can set up sole proprietorship companies, LLCs, LLPs, or other types of companies. Although the sole proprietorship companies may be named after the person, they are technically companies with business licenses.

When you make a contract as an independent contractor, the client company pays for a specific set of services from the contractor company. In an employment contract, a different process happens entirely. The employee is defined to have a specific skillset and to fulfill a specific position. That position might have duties defined in the contract, or it could be defined by an industry-standard set of duties.

Independent contractors don’t always fit into the “role” or “position” concept. Instead, specific tasks, milestones, or project definitions are set, which the contractor is compensated for. A good contract states exactly what the contractor needs to do in order to get paid, and the contractor isn’t required to do any additional work, even if their contract resembles a traditional employment position which is defined by other duties.

In an employment contract, it is common for employees to be paid by the hour, called a wage. This is relatively rare with independent contractors. Because the contracts stipulate what work must be done in advance, the contractors can be paid a set rate for the project or time period that has been designated. Contractors have termination dates set forth in their contracts from the beginning. Although they can be renewed with a new contract, they aren’t as open-ended as employment contracts, which require the employee to be fired or to resign for the employment to end.

Benefits are another element missing from independent contractor agreements. In the employment contract model, employees are often offered benefits to sweeten the deal and allow the company to pay a relatively lower wage or accompany other perceived negatives of the work. The payment for health insurance, transportation, and even contributions to retirement or pensions are commonplace in employment agreements, but generally never present in independent contractor agreements.

The word “independent” in the name of the contract has other meanings as well. The contractor/company doing the work needs to pay taxes independently. As they aren’t taxed as an individual, they need to pay taxes on their own. With employment agreements, the individual or person working as an employee has social security and other tax components withheld for them by the employer company. Independent contractors seem then to be paid more because they get the entire amount. They must later pay taxes though on any amounts they make.

Clients, in the case of success fees, will pay a certain amount to the contractor if the project meets certain success criteria or milestones, and may pay another (smaller) amount if the project does not meet the milestones. The criteria may vary greatly, dependent on schedule, quality, or independent testing. Whenever customized criteria for a project are defined, contractors should use standards and refer to them in the contract whenever possible. Limit the possibility and severity of future disputes by making the criteria for job completion as well-defined as possible. In any contract or agreement, both parties generally benefit from including as much detail as possible and reducing the requirement for additional documents, discussion, or disputes later on to resolve ambiguities.

In any contract, a certain amount of the text should be dedicated to reducing risk and liability for both parties. This independent contractor agreement is no different. We’ve included several standard sections on the establishment of jurisdiction, dispute procedures, and even what to do with intellectual property, in order to increase the contract’s enforceability and make it known to all parties what to do in the case of any dispute.

Especially in open-ended contracts, you will want to make sure, whether or not you are the contractor or the client, that you are making things fair. Fairness is always a factor when the contract is reviewed in a court before a judge. If the contract doesn’t give the client or contractor enough time to decide, or includes unclear language, or even excessive legalese, the contract can be dismissed and found invalid by the judge.

As the writer of the contract, you should present the contract to the other party, explaining each section, and asking them to read and ask any questions. Even asking them to initial each page may not have any legally binding authority, but it might increase the enforceability of the contract if a dispute is made later on. Never use a contract to try to trick another party out of lack of understanding- eventually, it might lead to a big lawsuit later on. As long as you keep things fair and make sure that both parties exchange something of value to the other, your contract will be off to a good start.